This is the second of my “trail race each month” goal for this year and the first time running this race. I really enjoy getting out onto Whidbey Island and I was able to make a day out of it.

Similar to the last race, I wasn’t sure what to expect. I knew from looking at previous years’ results that this would be slower, due to the elevation change, but I didn’t have a good sense for what pace I’d be able to maintain.

The first half mile was around a big field, allowing me to get a sense for where I was in the race. I settled into 7th overall and 5th male. I decided to try to move up and get a top 3 finish. In the end, I failed to do that but not for lack of effort. In the second wave, someone beat me anyway, bumping me down another spot. 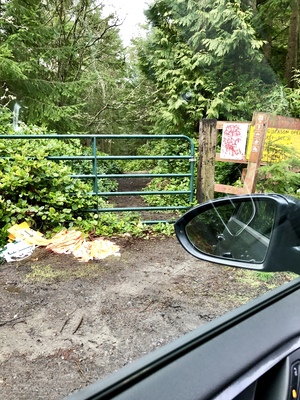 The ferry schedule was a bit awkward because it only runs hourly in the mornings. I had the choice of arriving 20 minutes or 80 minutes before the start. I made the conservative choice. While I haven’t had any issues with Apple Maps in years, it did suggest a very direct way to the start, pictured here. After finding a road to drive on, I still had time to explore the park a bit and get a couple mile warm up in before the race.

The start was cross-country style, with about 50 yards before the first turn. I was expecting a mad dash, but the field appeared to be hesitant to be too exuberant. As previously mentioned, we circled the large open meadow before heading up a steep hill and onto the single track.

The first section of the trails were narrow, with a bunch of ups and downs. I pushed hard to avoid having to slow down to let people pass. It was more down than up and it ended up being my fastest split (8:09). I was pretty sure I couldn’t keep that pace once the hills arrived. I wasn’t wrong about that.

I ran with the 2nd place woman for the first couple of miles. She was setting a steady, solid pace on the uphills. At a wide, flat section, she moved off to the side clearly indicating she wanted me to pass her. I’d be seeing her again later, though…

I quickly moved up and caught the 4th place male. He was flying up hills and pulling away from me, but then I’d catch right back up again. Soon before the three mile mark, there was a long downhill where I overtook him. I flew through the aid station, since I was carrying water, and tried to put some cushion between us.

The fourth mile was the most challenging for me. It had the most elevation change, making several ascents up to the ridge along the coast. It caught up to me and I had to start hiking up the steepest sections. Once that happened, the 2nd place woman appeared, passed me, and left me in her dust.

The course circled back through the starting area. I got there as they were assembling for the start of the second wave. Running downhill through a cheering crowd was a nice boost. What I didn’t know at the time was that the other benefit was that the photographer was there instead of at the incredibly steep hill to get back onto the trails, where he got a shot of almost everyone else walking up.

The last mile was around the campground, circling back to the finish. The previous section gave me a clear view behind me, so I knew I had a large gap. All the more reason to push hard to the finish to avoid the shame of being run down. I saw nobody in that last section until I popped out of the woods and had 100 meters into the finish chute.

After a couple of cooldown miles, I stuck around for the awards and raffle. It was fun seeing the second wave and the 5K runners finish. Trail races are have such a positive vibe, it can be uplifting to just hang out for a while. I eventually won a chocolate bar through attrition in the raffle (that poor woman read almost every number).

My grandpa always used to like traveling home a different way than you took to get somewhere. I took that advice and slowly made my way north along the island. The weather was brisk, but there were blue skies and it was a relaxing, beautiful day.