This if the sixth of my “trail race each month” goal for this year. Halfway there! The Redmond Watershed is a great running park. There are nice wide, fast trails and you can connect to some other regional trail systems.

I really had no goals going into this race. I’m in the middle of a three week building block, running the most miles of my life. My legs were a bit sluggish on my long warmup. I recognized some fast people from previous races. This was going to be a 5 mile tempo run with some motivation to keep the pace up.

Twelve miles were on my training plan for the day. I showed up about an hour before the race, got changed, and headed out to get as much of a warmup as I could before the start. Even though I know this park very well, being away from the starting area was nerve wracking and brought back a fun memory from high school.

We were at an indoor track meet at Ohio State and I was running the two mile. There were two heats scheduled. Going through my warm up routine, when I saw the first heat walk down to the starting line, I went to check in for the second heat. I was quickly informed that they combined heats and I should be at the starting line, sending me into a pure panic. I ripped my warmups off, and sprinted down the home straight just to be able to start the race. I don’t remember how I ran, but I do remember my coach being not-too-happy with me.

With that memory fresh in my head, I cut my warmup a bit shorter than I could’ve and got to the start line.

At the start, I ended up on the front line and in the front pack. There were ten of us flying through the initial trail. It was crowded and fast. After a half mile, three small groups formed.

I was running 9th/10th. It was impossible to say which, because the guy beside me matched me stride for stride. On uphills, I’d shorten my stride and slow down – he was on my hip. On downhills, I’d open it up and speed up – he was on my hip. I’ve never had anyone so clearly try to stay right beside me like this before. I started putting short surges on to try to shake him, to no avail. Finally at the top of a longer climb, I put in a sustained surge to catch the runner in front of us and got in front of him before getting onto a narrower trail. That was the last I saw of my hip-mate.

Looking at the race pictures and then results, I realized that runner was 14 years old. Good for you, kid. Thanks for pushing me. If I’d realize it at the time, I might not have thrown so many surges at you.

At this point, I was sitting in 8th and could see a pair of runners up in front of me. Soon afterwards, they were out of view and I ran the last half of the race completely by myself. I was getting suspicions that the course was short based on my watch and how far around the loop I was, but it was reading good paces so I didn’t sweat it.

There was a long, sustained downhill section and I kept my focus on pushing hard. “Make hay while the sun shines.” I knew there was a matching long, sustained uphill awaiting me. I ran that well, but was sure that the course was short at this point. I ended up passing another runner who appeared to have pulled a hamstring. 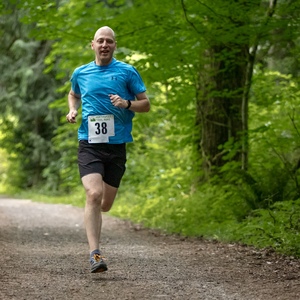 In the final half mile, I was in 7th place but there were two races. I might see runners doing the 10 miler heading back out, each one bumping me up in the 5 mile results. There was one… two… three… and then I saw the finish for a 4th place finish.

After catching my breath and getting some water, I saw the race director. “How confident are you on the course distance?” She laughed and said that GPS is terrible in the park. They’ve used a wheel and confirmed it’s slightly over 5 miles. My watch registered 4.57 miles. There are two upsides to this:

These mid-week shorter trail races are a lot of fun.